For those who want to see Derry City flourish, I recommend a trip to the southern Dutch city of Gorinchem… – Slugger O’Toole

I am in the former camp and as such I am unimpressed by those in the latter camp, whether their MO by bombs or political sabotage (which only covers all incoming Whataboutery bases).

For those who are firmly in the camp of prosperity, can I recommend a trip to the southern Dutch city of Gorinchem? (Somehow pronounced ‘Hkhorkem’ …)

It has a largely intact walled city center slightly larger than Derry’s and a population of just under 40,000.

It’s almost an hour from the sea but has a shipyard.

It has a canal / waterway that divides the city in two.

It has many pedestrian and car restricted areas and winding streets

It is surrounded by parks and allotments.

All in all, it’s a pretty pretty place. And that drove me crazy.

See, all I could think is, “Why can’t we get some of this ?!” while biting my knuckles off my fingers.

So let’s see what could be done to make Stroke-City (or any other walled city) like Gorinchem.

NOTE: All of the following photos were taken either from inside or from above on the city walls and ramparts, so the greenery, parks, etc. are not in a distant suburb, but around the central old town 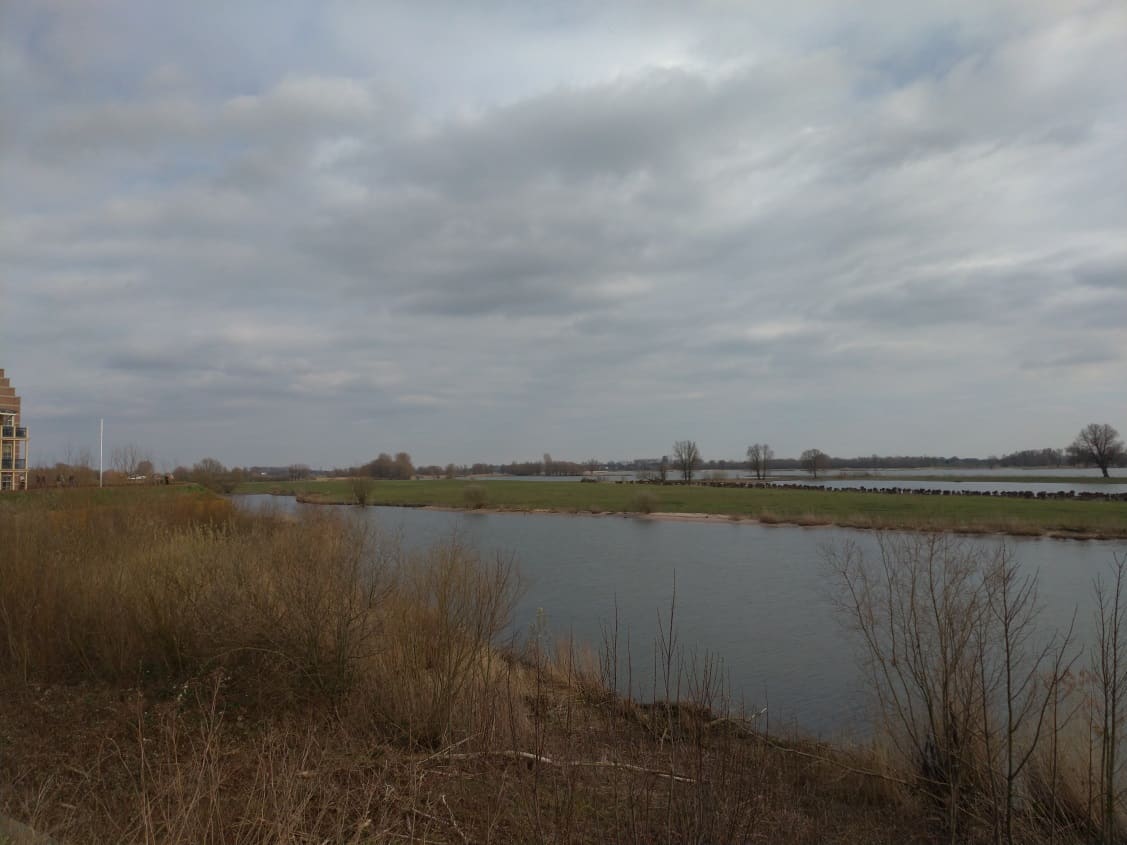 Part of the rivers running along the south side of Gorinchem. get lost 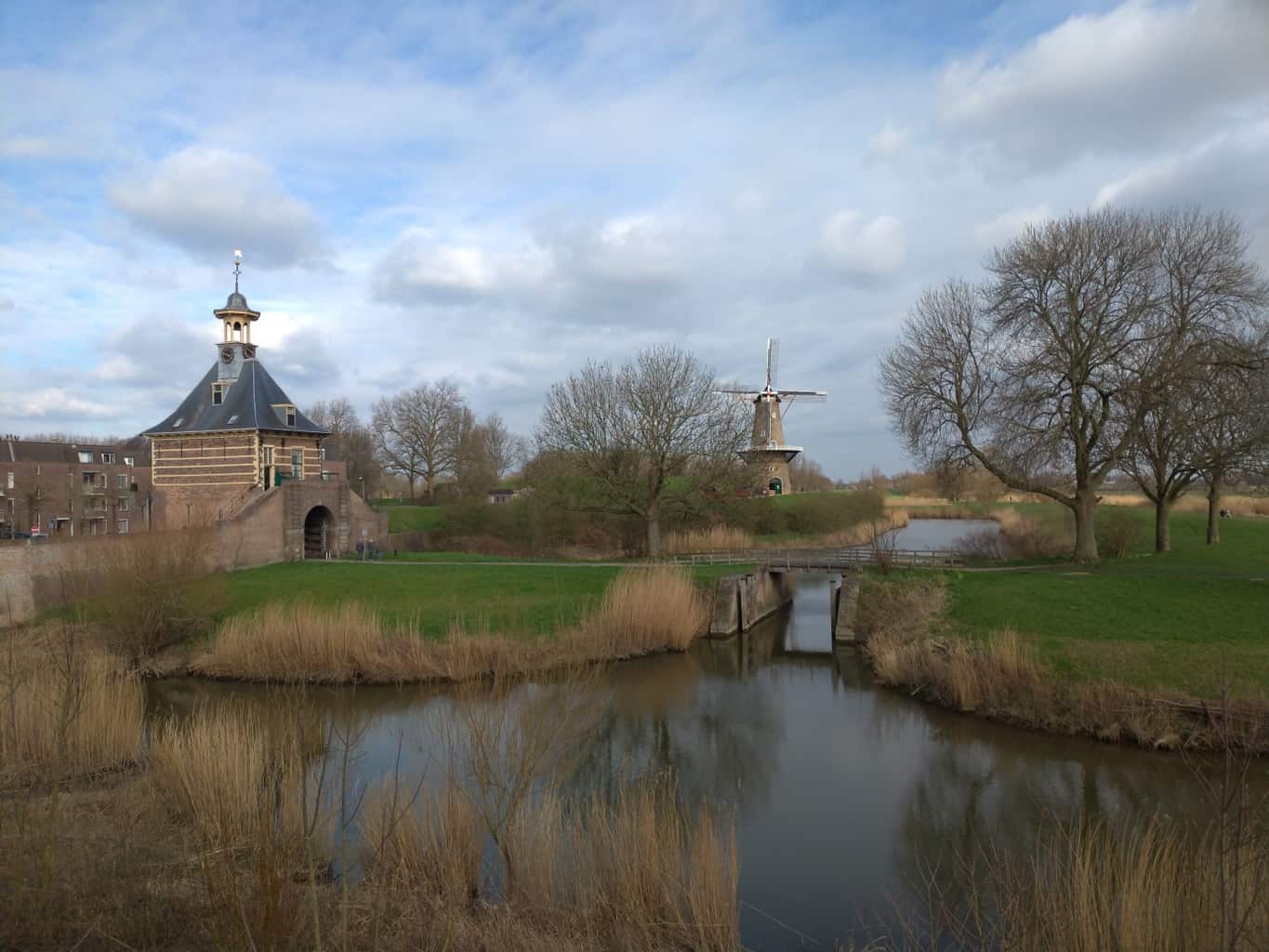 A gatehouse for the city wall and mandatory Dutch windmill

The areas to the south, east, and north (east) are practically rivers, moats, parklands, and allotments, just as you would land if you jumped off the walls. 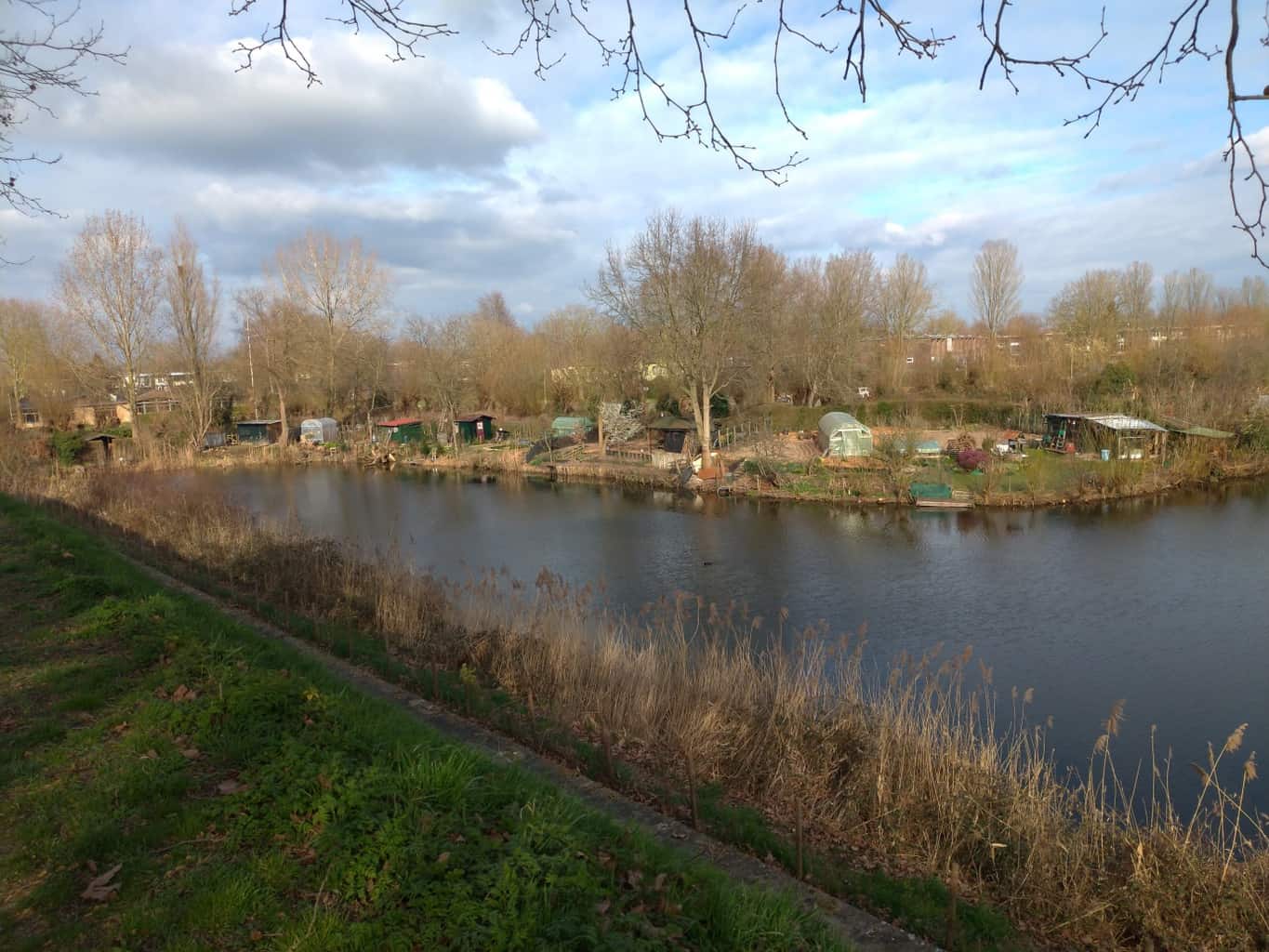 An allotment garden, directly opposite the moat from the city wall.

Part of this land would theoretically be prone to flooding, but much of what is dedicated to parkland and allotments could easily be turned into something more urban.

The population density of the Netherlands and the high property prices would certainly make it an attractive option for any developer if they had a chance of getting a building permit. But they just happen to have no chance.

So, here we have a city where you can’t buy a house inside the walls for less than 350,000 euros, but the city center is not surrounded by blocks of flats and housing estates, but has a lot of open space. If it is not due to a lack of economic efficiency, it can only be due to the regulations.

Would our cities benefit from protected green spaces? Does Carrickfergus really need that much parking space?

I’m not sure how many streets are pedestrian or WRT is restricted to cars, but it’s a lot. 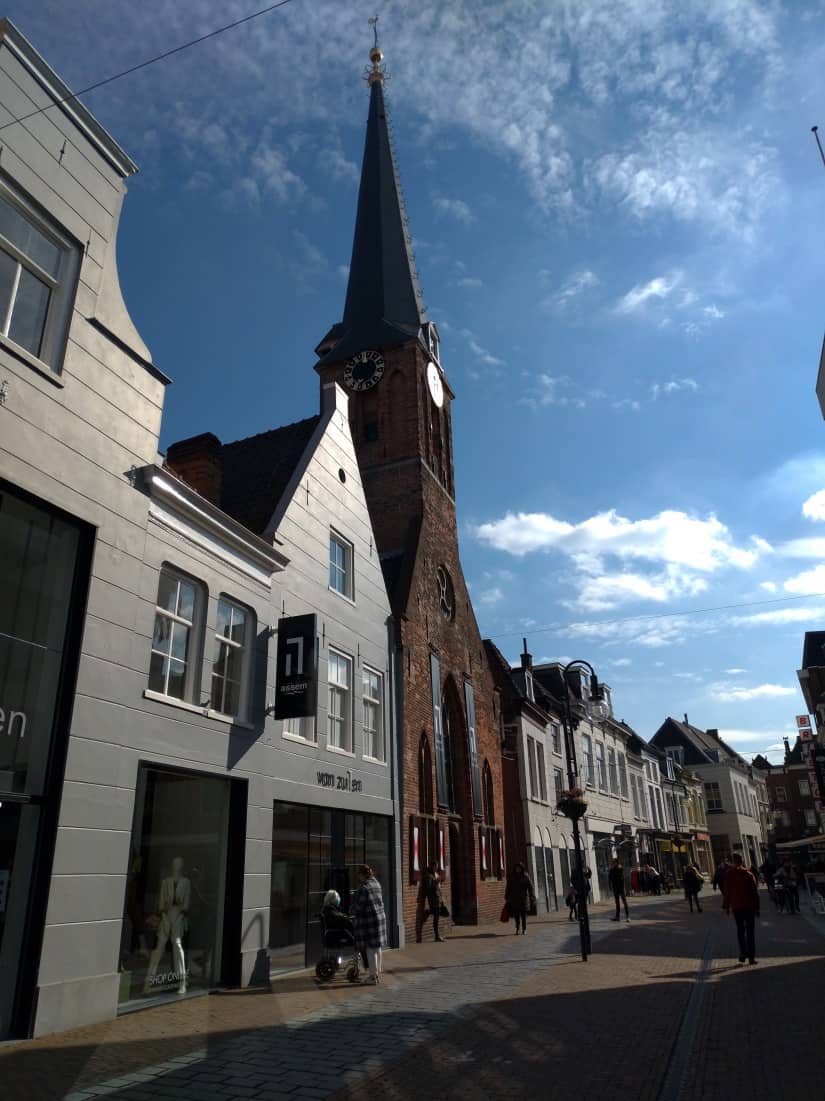 One (rather expensive) lane away from a pedestrian zone

The city is full of walkable places, free of traffic and fumes. In our mentality, downtown houses are places that you leave behind.

The city center is stupid in terms of house prices: (Enter “huis te koop Gorinchem Binnenstad” if you want to do your own research)

There is a main square, small markets, cafes, restaurants, parks and a sense of vitality so people really WANT to live here.

While we are talking about the coming existential crisis of our inner cities, they speak of “How can I afford to live in the inner city?”

According to Northern Irish transit logic, the city center should be dead as there are no main roads running through it and because it is so traffic-calmed that people park nearby and WALK to the center (!) Parking in the few parking spaces).

Still, the city has a sense of liveliness (even during a limited lockdown). So how is it that this city center, which is relatively inaccessible compared to our cities (the island itself has only four streets and a handful of parking spaces), is so alive when it should be according to our own car-dependent logic? calm?

Could it be that, despite the inconvenience, people like to get away from the constant traffic? Or is it just a Dutch cultural trait? Would our citizens be unhappy to think of having to walk through stores without cars rumbling past them? Are we addicted to the accompanying exhaust fumes when we sit outside for a coffee / tea / pint?

In general, the city center is quite intact as most Dutch cities have strict rules for demolishing old buildings and planning in general (you can see the difference when you leave the Netherlands and end up in Germany or Belgium where the laws are not so strict).

On the flip side, this Derry hotel is NOT taking on multiple old buildings, preferring to be completely demolished and rebuilt

“NORTHERN IRELAND ministers have proven powerless to stop the illegal demolition of one of Londonderry’s most important historic buildings. The huge Victorian clothing factory Tillie & Henderson – mentioned by Karl Marx in Das Kapital – is listed as Grade B plus, the equivalent of a listed building in England. “

Gorinchem is not a complete museum, there are of course modern developments, including apartment blocks.

But unlike many developments in cities in Northern Ireland, they do not clash with the existing architectural fabric. 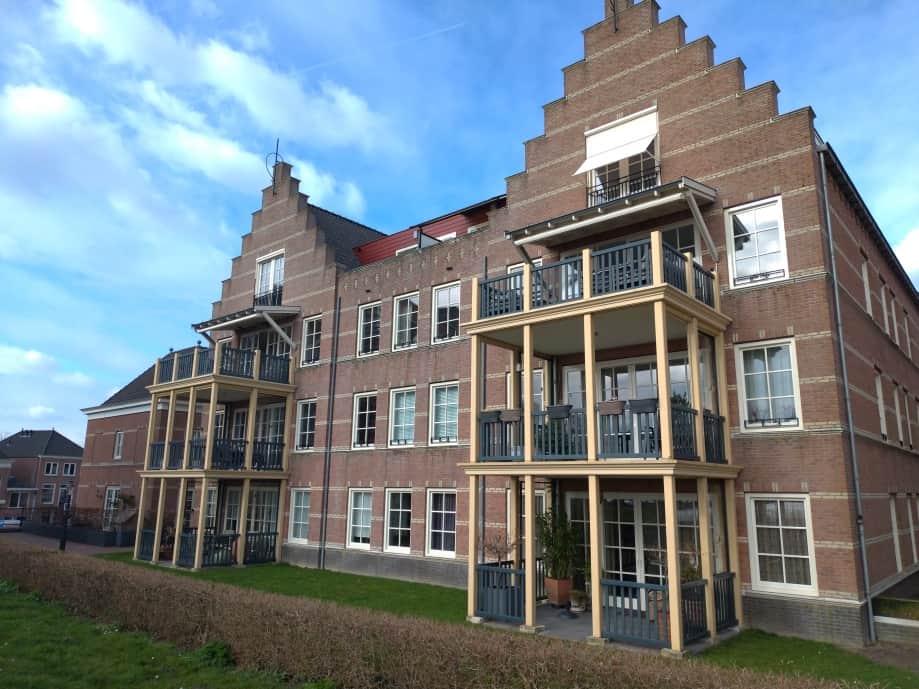 Waterfront Apartments: Built with a nod to the city’s existing architecture and not too tall to clutter the skyline

And like everywhere in Holland, it is littered with waterways that are accessible, beautiful to look at and livable.

And like everywhere in Holland, it is littered with waterways that are accessible, beautiful to look at and livable.

An inhabited windmill that stands over inhabited boats

The main canal that cuts through the old town

An inhabited windmill that stands over inhabited boats

The main canal that cuts through the old town

Now I understand that Derry is a long way from the Netherlands in terms of investment and economy, so let’s compare Derry to some of NI’s more affluent cities;

Prosperity must be managed and used accordingly, otherwise it will become a parking garage for everyone.

Derry has been spared the downside of ‘progress’ and is now able to avoid the mistakes of other cities?

I know what i would do

Found in the food chain, a creature attacked in the middle of the road by creatures from both sides of the political jungle, feeds from below from ‘Republicanus hypocriticus’, better known as the ‘common gloss’, to the chameleon-like ‘Unionisus opportunitisticus’. ‘, better known as’ Dooper’.

It is known to feed on unicellular organisms such as ‘Rangerophilus fanus’ and ‘neque Deditionem’ better known as ‘no surrender’ and occasionally appearing during the rutting season to associate the horns with ‘MOPEus Eternus’, better known below their nickname ‘MOPEs’.

What Veterans Cemeteries Benefits Do I Qualify For?